Today Doc and I had lunch with Kevin – one of our former solar race car students from 26 years ago!!!!  Kevin has been working abroad.  For the past 15 years he has lived in Odessa, Ukraine.  Needless to say the conversation over lunch was fascinating! 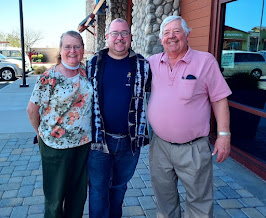 Kevin has friends and contacts throughout Ukraine from whom he is getting updated information.  Kevin said the news we are seeing in the U.S. is highly exaggerated.  Most of Ukraine is still operating fairly normally.  He said the country has been at war for the past eight years.  Citizens were aware of the presence of Russian military, but no one expected the attack going on now.  His sources say only 500 or so innocent Ukrainian Citizens have been killed.  Most fatalities are military on both sides.

Kevin said another casualty of this siege are the pets.  People who are fleeing must abandon their pets.

·       Kevin is in California because two days before the Russian invasion, he came back to the U.S. to attend a training session.  He has his travel clothes with him, but all his other belongings are still in his Odessa apartment.

·       Kevin ordered pancakes for lunch because it is not something he can get in Odessa. LOL

·       Kevin brought Doc and I some gifts: a Magnet of Ukraine and some coasters with Odessa highlights.

Kevin did not know about my Penny Finding, yet he somehow was ‘nudged’ to pull out some Ukrainian coins to offer Doc and I.