Another year of finding coins EVERY DAY!  Pretty amazing.   There were plenty of interesting tales – funny ones, mind-boggling ones, and even some nail-biting ones.

***********
Finding daily coins this year was not always an easy thing to do.  When Doc and I travelled to Panama on a tour bus with 40 other people, it was a real challenge to find coins.  My broken foot in August and subsequent surgery made penny finding (and everything else) a bit more difficult.  For three months I was not allowed to drive.  Thankfully each day Doc would gallantly make sure I got out of the house to find the requisite coins. North Dakota in September was quite sparsely populated – with both people and coins!  And the snow in Tehachapi made driving into town impossible with our car.

***********
Many of you are “left brained” (logical engineering types) and would prefer to see the numbers versus reading the cutsie stories.  So here is the data for you:

The Angels were there EACH DAY for us in 2016 in all sorts of challenging situations.  They are there for YOU as well.

Once again it’s been three months since my last Penny Tale posting.  Time flies when you are retired and so Busy!  Last month Doc and I travelled to North Dakota to obtain the 50th and Final coffee mug for our United States cup collection.


We had to cancel half of our prepaid trip due to my unplanned broken foot and surgery.  That was the bad news.  The good news was that we rented a car (versus being on a bus tour with 40 other people) and were able to continue our daily coin finding.  It has now been 527 consecutive days of finding a coin of some sort.

**********
Today Doc went to son Brian’s house to help with a bathroom renovation; I had our whole house to myself.  Since I could not drive anywhere (due to the broken foot), it was an opportunity to do some chores which had been neglected over these past few weeks.  Dusting seemed like a fairly ‘safe’ chore (as long as I stayed off ladders).  I tidied some piles of things, then began dusting.

As I was dusting, I was thinking that when Doc came home we would need to go out Penny Finding for the day.   I had used the washcloth-sized rag on a few shelves thinking nothing of it.  I got to this small shelf (see photo) which was empty.  I made one quick swipe across the shelf and a Penny fell out of the dust cloth!  It was like something from a Magician’s parlor trick!  I was stunned!  I could not figure out where that Penny came from!

I took a closer look at the Penny.  It was dated 2015 D.  When my dog Norman died, the only Penny I found that day was a 2015 D.  (See Norman's Way Blog).  Doc had said, “Whenever you find a 2015 D Penny it will be a sign from Norman that he is with you”.  Thanks Norman for continuing to help out around the house.

Reminder:  Our loved ones are nearby.  Somewhat like having them still in the house, just in a nearby room where we can not see them.  Listen carefully and you might still hear them – they certainly can hear You.

It’s been three months since my last Penny Tale posting.  WOW!  Although the Penny Angels have continued to provide coins EVERY day during that time, I’ve just been busy with some other Passion Projects and not been writing about the coin finds.

Recently Doc made a quick run to the grocery store.  He came home with 13 foreign coins from SEVEN different countries.  Can you identify which countries these came from? 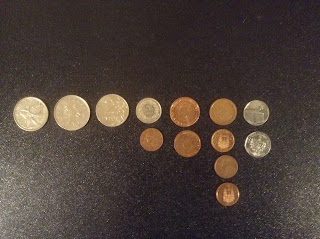 Penny Angels probably don’t care much about human-determined political boundaries.  They have fun providing coins of any nationality!

Doc thinks the foreign coins are a sign that we should embark on another out-of-country trip soon.
Posted by PennyFinders at 7/19/2016 No comments: