Stray coins in Canada are essentially non existent!  I must have walked over 10 miles today in search of a coin - ANY coin!

At 7:30 p.m. when the other passengers were sitting down at the restaurant for dinner, I went for a walk.  All day I had been searching for coins.  We stopped at two very busy Travel Centers, quaint towns, several Starbucks, Tim Horton's and other places.  Not a single coin was found.

By 9 p.m. when the bus dropped us off at the hotel, I was desperate for a coin.  I asked the bellhop Nicholas for advice.  He suggested walking down Elgin street.  Lots of construction, uneven cobblestones, scaffolding and cigarette butts.  Not a single coin.

At last Doc said, "That might be something."  It was caught on a concrete ledge about 16" below the sidewalk grating.  What could we possible use to serve as "long chopsticks"?  We found two .5"x 2"stakes and tried at least two dozen times to lift the dime with those.  Doc snapped one of the stakes to make it shorter and we tried many more times.  No luck.

Envision Doc and I sitting/laying on a downtown sidewalk at 9:00+ p.m. with our noses down into a metal grate.  Some people were stepping around us (as they would in trying to avoid a homeless person) others were asking if we were okay?  Had we lost something of value?  I tried to explain that I NEEDED to get a coin TODAY!  My Readers were demanding it!  LOL

Finally I stepped back and did some serious talking to the Angels.  I said, "Hey guys (or gals), I have been faithfully searching for a coin ALL day.  I have completed MY part, I need you now to do yours.  What we really need is perhaps some duct tape.  That solves a lot of things.``

Within 1-2 minutes a couple and their dog walked past.  They stopped.  They did not ask what we were doing.  Instead the lady said, "Do You Need Some Tape?"  I replied, "You are joking right?"  She said, "No really.  We have a roll of tape here!  Would that help?"  and she pulled a roll of clear packing tape from the small bag they were carrying!  No kidding!  Who in the world takes a large roll of tape along to walk their dog?

Doc and I had tried for 30+ minutes to get that coin.  With the "divinely delivered tape", we had the coin in less than a minute! 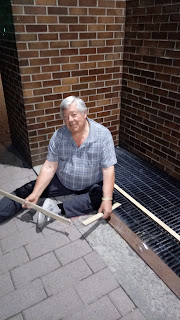 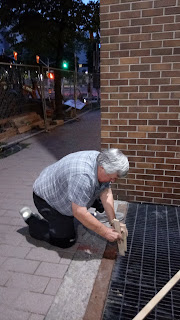 The other 39 passengers got off the bus and went to look at THIS (Niagra Falls). 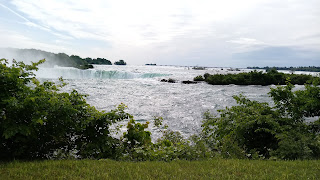 I stepped off the bus and was focused on THIS!  My Penny for today.  Yipee!!! 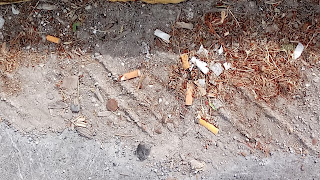 Doc and I arrived in Toronto late last night.  It might be difficult to find pennies in this country.  After Feb 4, 2013 the Canadian Mint no longer distributes pennies.  On that day they began melting down the 35 billion pennies in circulation.

Doc and I began today with a wonderful buffet breakfast and a server from Afghanistan.  He was awesome.  I gave him a JOY card.

Then Doc and I were off to the nearest Post Office.  We needed to get postage stamps. We found a small postal outpost within a convenience store, but they didn't carry postage stamps!

Of course we also needed to buy postcards. They were $1.11 each at the hotel.  We gotta do better than that!  Someone suggested going to China town to search for postcards there.

Doc and I were walking the streets and I was asking the Penny Angels for assistance in finding today's coin. 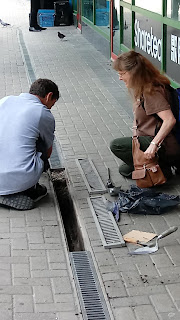 I spotted a man shoveling out the accumulated dirt in a drain.  Of course there were also leaves, cigarette butts, trash, etc.  I stopped to talk to him.  Tina:  "Thanks for doing that job.  I bet you have found coins in there". Worker:  "Yes, I found one a few minutes ago".  Tina:  "I'll look and see if I can find one."  Of course, I did find a coin - a dime.  Steve pulled the metal grate out of my way so I could get to the coin.  We had such fun together.

In our walkabout we encountered thousands of people, but no other coins.  Finally Doc spotted a PENNY!  It was a 1976.  Only pennies minted in or after 1982 are considered "legally in circulation".  So does that make the one we found an illegal penny?

I was lamenting the lack of pennies and showing my PennyFinding shirt to a Chinese gentleman who sold us 70 postcards.  He barely spoke any English.  He searched for a few minutes and then presented me with two Canadian pennies as a token of goodwill.

Penny Finding is a sport which brings people together.
Posted by PennyFinders at 6/07/2018 No comments:

I had been working hard at home all day, so around 7 p.m. I decided it was time to get out of the house and get some fresh air.  Doc’s vehicle needed fuel so we went to the local gas station.

While Doc was fueling his van, I hopped out to look for a coin and take Dundee for a quick walk.  There was a penny practically under my foot as I stepped out of the van.  Done!  I told Doc we could leave since I had found my Penny for Day #324.

The car wash next to the gas station had closed for the day, so Dundee and I headed over there to do our respective duties.  I was thrilled to find a few pennies, then a nickel and a penny under a bench.  I checked the area carefully including the area around a hose bib.

When Doc was finished fuelling his car, he walked over to the car wash in order to log more steps on his pedometer.  I told him I had checked the area thoroughly and was ready to go home.  He had fun checking the area after me while I walked over to the convenience store and collected 2 pennies and 2 dimes in one parking spot!

I was sitting in the van impatiently waiting for Doc thinking: “OK Smarty Pants!  You are wasting MY TIME!  I have already searched the car wash areas.  I want to go home and get back to work.  I found pennies, a nickel and a few dimes.  I dare YOU to find the quarter for a Hit for the Cycle.”

As Doc got near the van he started talking: “So you carefully checked the car wash, right?  So you didn’t expect me to find any more coins, right?  What about these 12 coins?  I found them in various cracks and such.”  (Shown in left hand) That makes a Coin Mine which I overlooked! 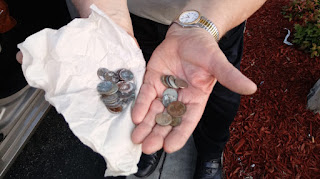 Doc went on to say: “I thought you looked around the hose bib?  It appears you missed a few!  Looks like someone washed these 24 coins off for me and left them in a pile!”  Then, as Doc was bragging about all his finds, he looked down to see a quarter at his feet!

Doc quipped, “YOU were looking for the easy, low-growing fruit to pick; I was looking higher”.
Nice Lesson.

We made a brief stop at the grocery store where Doc found another quarter!  I guess he took it as a Double Dare to find that quarter!   LOL