This afternoon Doc and I made it to the bank 3 minutes before they closed at 1 PM. As we were leaving the bank manager asked about the Penny Palace progress and today’s find. I told her it was Day #750 but we hadn’t found any coins yet. I then had to explain Penny Finding to one of the newer tellers. Doc and I walked out and the door was locked behind us. We turned to find a shiny shield penny in our path! (Coin #1). I knocked on the window and flashed the penny. Was greeted with “Thumbs Up” signs from inside. JOY shared! Once again a coin appeared within moments of my telling the tale.

I was happy with that find and ready to go home. Doc was not satisfied because he wanted HIS coin. So he insisted that we walk around the high school parking lot. He found a dime and three pennies. (Coins #2-5). I walked around the perimeter of the skateboard park. I found one penny. (Coin #6) Then I spotted a fairly nice kitchen butter knife. I thought, “How Unusual! Why would this knife be at a skateboard park in the bushes?” Within a few feet, I spotted a penny. It was through the fence and a few inches outside my reach. I just needed 3-4 more inches of arm length. Of course! The knife! That is why it was there. A Tool just for Me! That penny, and the next two, required the use of that tool! Coincidence? (Coins #7-9)

Doc insisted upon a drive through McDonalds. He got a burger and a penny. (Coin #10). While Doc was ordering, I rushed through the self serve car wash looking for coins. A seemingly nice gentleman said, “Hello”. I said to the Penny Angels, “This guy looks really nice. You should show me a penny so that I can SHARE with him.” I didn’t find any coins in the wash bays and Doc was already paying at the drive up window, so I turned to walk away. There was a penny (Coin #11). The nice man said, “Have you Lost something?” I replied, “No I have found something. This penny. And you are my witness for Day #750 of Penny Tales.” JOY shared.

I wanted to stay home the rest of the day. Doc did not. (Mostly because the things on his “To Do” list are things he has been ignoring for weeks and he wanted to continue in that mode). We went to a lighting store to return a defective item. Doc enticed me to go by telling me he would look at light fixtures for the new house.. While I returned the product, Doc walked the parking lot with my dog, Norman. Doc came in the store saying, “You gotta come out here! I found coins and I need your help.” I asked him about looking at the lights. He looked for 2-3 minutes, said I like that one for the Grand entry. Done! I said, “that one is $750 and the budget is $150. Try again.” He said, “We are losing daylight, let’s go!” 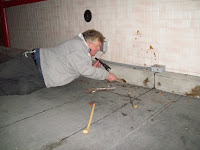 A Kentucky Fried Chicken (KFC) store had shut down and Doc had found a penny at the drive through. He spotted a quarter deeply embedded in the crack under the drive up window and wanted my assistance. After assessing the job, we pulled out the tools: pry bar (chop stick), flashlights, pliers, keys, etc. to work the job site.

The first four coins retrieved were the quarter, two pennies and a nickel. Combined with earlier finds today, we now had a “Hit for the Cycle.”

Some of the coins were really entrenched! Some were several inches down under layers of STUFF. Doc spent 45 minutes flat on his belly, on the cold concrete, unearthing one coin after another after another. It took both of us working together to release the precious metals! I actually got up and left three times telling him this was stupid, wasteful, frustrating, etc. He just would not quit!

Thought: Perhaps the Angels are just warming us up for working harmoniously together and wielding the tools for the new house. 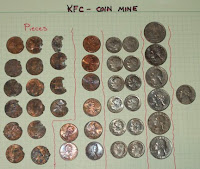 Doc had just about the worst case of Penny Fever I have witnessed! He finally agreed to quit! After getting home and “bathing” the coins, we counted 24 pennies (or parts thereof), 12 dimes, 6 quarters, and only one nickel.

Doc made a quick stop at the grocery store to wash his dirt- stained hands. We found a dime there. (Coin #55)

On the way home I was questioning Doc’s choice on that light fixture. He said, “We’ll just get one at the Goodwill store.” I told him, “not likely to find one there”. We stopped at the Goodwill Store to prove my point. Then another thrift store to further emphasize my point. We did find a dime there. (Coin #56).